All My Sons
Arthur Miller 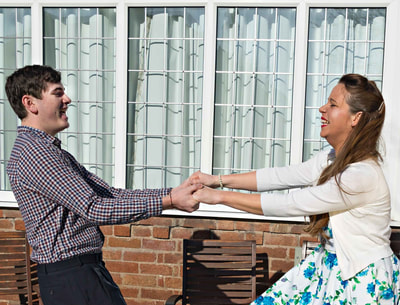 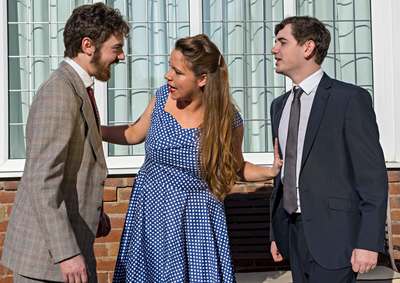 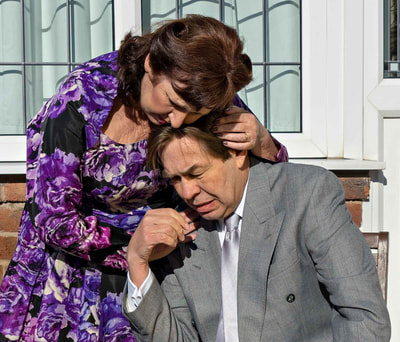 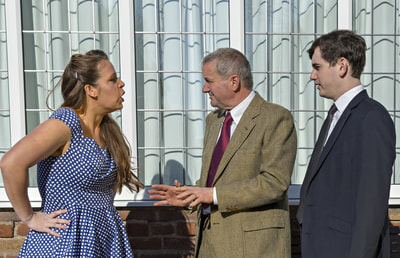 What the papers think... 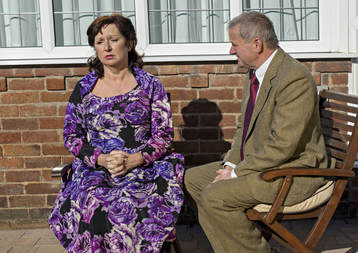 The action of the play, with a flawed protagonist and the action on a single day, is reminiscent of a classical Greek tragedy.  The leading characters recount, often in soliloquy, the events which have led two neighbouring American families to conflict and then open confrontation. The cast of ten all do this exceptionally.


Andy Cooke, as flawed businessman Joe Keller, grows into the role, particularly in the dramatic scenes with his idealistic son Chris, beautifully played by Richie Withers, when his guilty secret is revealed.

Rosie Withers, as wife Kate, combines vocal mastery with subtleties of posture and gesture   – notably when she finally accepts that her missing airman son Larry is dead. She knows that Joe is responsible and her make-believe world and the American dream come crashing down.

Felicity Morgan, the messenger figure in the story and the pivot between the two families, excels.

Poppy Flanagan’s clear direction recognises the importance of unfolding the back story vividly and her placing of the actors sometimes literally head to head enhances the seismic conflict.


The sizeable audience was silent throughout, gripped with the tension of a first class play, memorably performed. 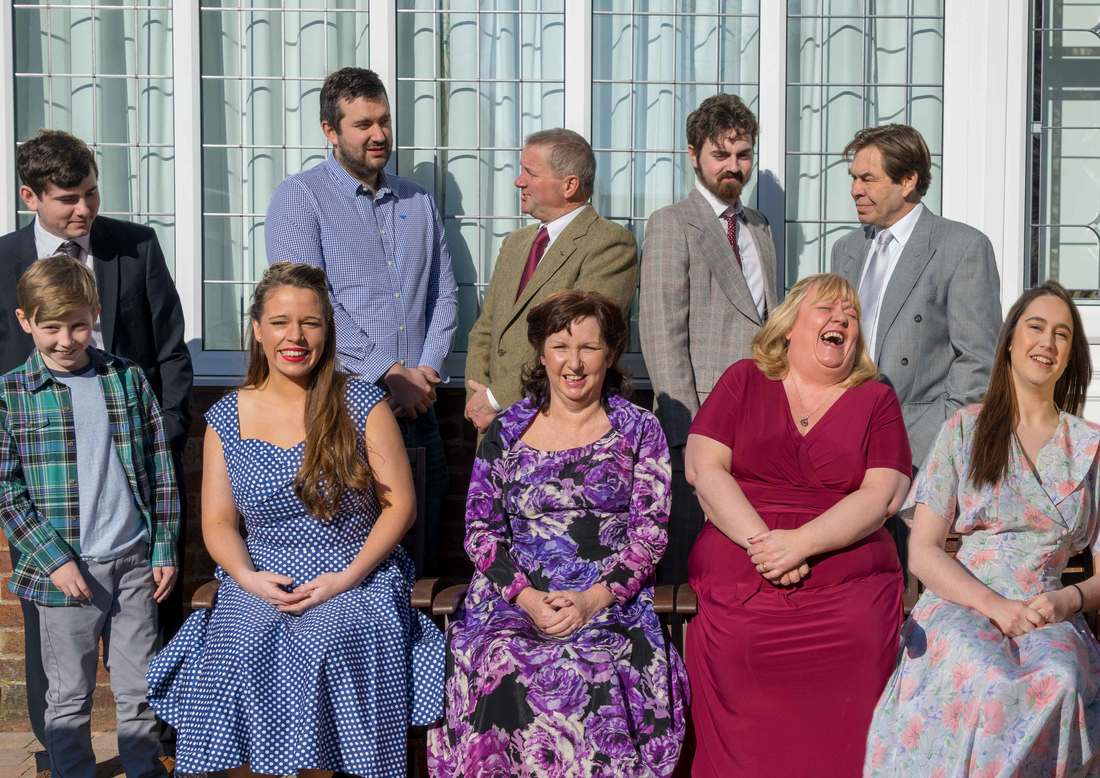 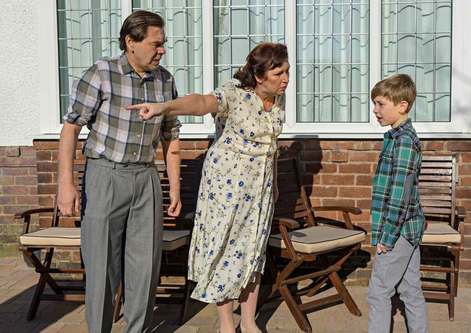 Set in the aftermath of the War in America, Arthur Miller’s iconic play has stood the test of time because it confronts realities we all face whatever the era, of trust and honour, guilt and innocence.
Andy Cooke was excellent as Joe Keller, owner of a successful business making parts for planes. However, during the War, faulty engine parts from their factory killed 21 airmen and his then partner, Steve, was sent to jail while Joe was exonerated.
Joe went on to make his fortune, aided by his son, Chris (Richie Withers), who joined the company after leaving the Air Force after the War.
Rosie Withers gave a superb performance as Joe’s wife, Kate. who refuses to believe that their other son, Larry, was killed in the War and is horrified when his fiancée, Ann (Felicity Morgan), turns up on their doorstep with the intention of marrying Chris (Richie Withers). Nonetheless the couple are adamant they will marry as they are sure Larry is  dead.
When Ann’s brother George (Tim Withers) arrives, he claims it was Joe who was equally responsible for the pilots deaths and he allowed Steve (George’s father) to take the blame. Both families are torn apart by the revelation. A pattern of deceit, guilt and corruption emerges but is it true? If so, what devastating effect will it have on both families?
Tim Greenwood and Debbie Couchman played next door neighbours, Jim and Sue Bayliss, while Matthew Eaton and Emily Cartmell were family friends, Jim and Lydia Lubey. Leo Heavyside made a lively Bert, a young boy who lived in the neighbourhood.
Director Poppy Flanagan and her cast deserve great praise for putting on a tremendous piece of theatre that would not have been out of place on the West End stage.
This was a production which had the audience riveted from the opening line right through to the final curtain. It was a pleasure to watch an intelligent play so well performed.
REVIEW BY RON ELLIS

The family that acts together stays together….

Whilst Rosie has directed Richie in two recent Fylde Coast Players productions – ‘Billy Liar’ and ‘Great Expectations’ this will be the first time they have acted together in main roles as, you’ve guessed it, mother and son. The first time Rosie was on stage with Tim he was only 5 years old and he played Tiny Tim in Fylde Coast Players production of ‘A Christmas Carol’.

So, how does it feel to be working together? ‘It’s very comfortable being on stage with my sons’, said Rosie, ‘it’s actually very reassuring. In my scenes with Richie, who plays my son Chris in the play, and the scenes with Tim, who plays my surrogate son, George, the emotions are completely natural – I don’t have to act. We can also help each other learning the lines. We’re all enjoying the rehearsals and looking forward to the performance in March.’

Below are pictures of the cast starting to get to grips with their parts under the eagle eye of award winning director Poppy Flanagan. 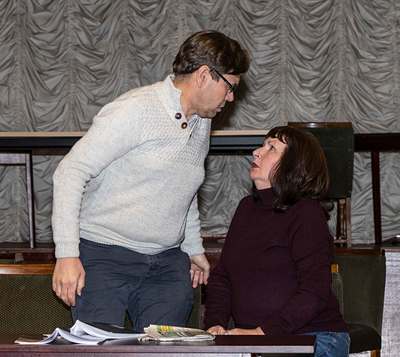 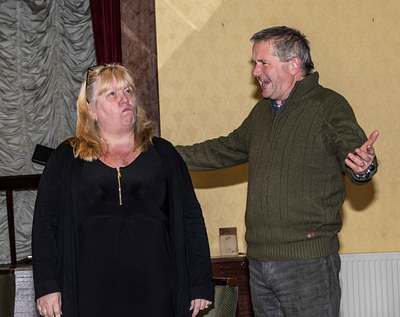 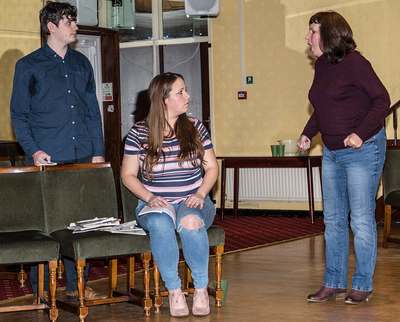 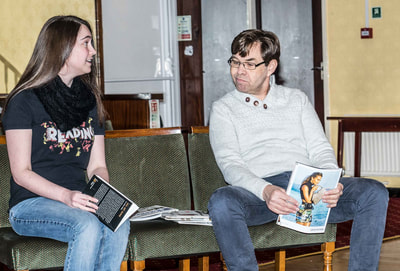 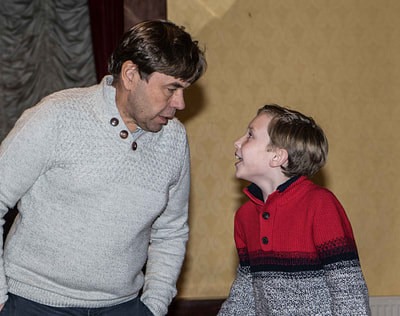 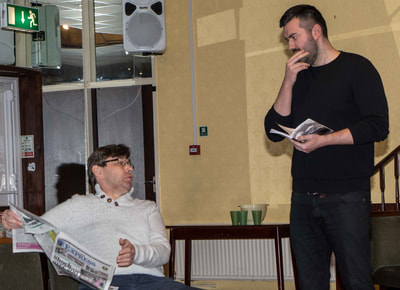