Welcome to the home page of Fylde Coast Players, rarely amateur, always dramatic. Don't miss our next production - A Play Festival that Goes Wrong - 3rd to 5th August 2022
The award winning group is based in Lytham St Annes near Blackpool in Lancashire.
This site will tell you about our productions (past current, and future), how and where to see us (usually Lowther Pavilion), and how to contact us.

Celebrate their 75 Anniversary with

A festival of five - yes FIVE plays each night to celebrate our 75th anniversary.  Actually four plays and an Opera.
Presented by those people who brought you The 39 Steps, Our Man in Havana and The Farndale Murder Mystery. The festival ranges from gritty northern dramas to Opera, a classic whodunnit and a historical epic. Nothing can go wrong .... (or can it??)

Following the success of '39 Steps' and ‘Our Man in Havana’, Heather Cartmell and the team turn their hands to presenting a Festival of Coarse Acting Show plays to celebrate the 75th anniversary of Fylde Coast Players.

The cast heroically tackle a ‘Who Dun It’ (Streuth); an operetta (‘Il Fornicazione’); a big screen classic (‘Julius and Cleopatra’); a gritty northern drama (‘Colliers Tuesday Tea’) and the Noel Coward tribute ‘Present Slaughter’. Is there no limit to their talents? Well there might be.....

Come and join us on what should prove to be a hilarious recipe for an enjoyable evening of fun and laughter. Just what we all need!
To book tickets follow THIS LINK

You have just missed.... 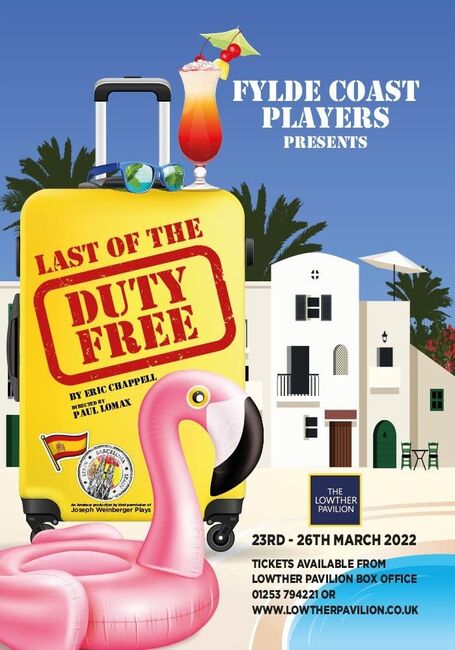 When working class David and Amy met upper middle class Robert and Linda whilst holidaying at the San Remo in Spain their differences were immediately apparent. But opposites are proven to attract and a most unlikely romance developed with hilarious consequences. And now they are back: David more lustful, Amy more cynical, Robert more dangerous and Linda more romantic than ever!
​
​
With love in the Mediterranean air holidaymakers look on in disbelief as deceptions, misunderstandings and preposterous situations unfold, with the love struck protagonists trying every trick in the book to keep their amorous intentions a secret!
​
To find out more follow THIS LINK